The Four Causes and How to Exploit Them.

Aristotle held that there were four kinds of answers to "why" questions, these being the Four Causes. The Material Cause, the Formal Cause, the Efficient Cause, and the Final Cause. To fully understand something, one must understand all of its Causes. I'm going to take my limited knowledge of the topic, surely get half of it wrong, and then put it to work for the OSR.

So let's go through the causes using, say, a plain wooden table.


The Material Cause of the table is the wood that makes it up. Now this might seem simple enough, you are merely naming the raw material of the object. However, on a deeper level, this is implying that the material effect (wood) always had the resulting form (a table) within it all along.

The Formal Cause of the table is its design. Better put by wikipedia it is the "the pattern or form which when present makes matter into a particular type of thing, which we recognize as being of that particular type." This is closely linked to the Theory of Forms (something I will absolutely explore elsewhere) which posits that the things we experience are merely shadows of some truer archetypal Form. Linking back to the Material Cause, the Formal Cause laid inert within the material cause, waiting to be unleashed.

The Efficient Cause of the table is the carpenter who created it. This is the closest to "cause" as we traditionally know it. The carpenter causes the table, the painter causes the art, the sculptor causes the sculpture. But, keep in mind, that these efficient or agent causes are merely the vector by which the Formal Cause may be made manifest from the Material Cause. When the sculptor chisels a statue from a block of marble, the statue had been within the whole time.

Finally there is the Final Cause. This is the reason for which a thing is done in the first place. The case of the table is fairly simple, its final cause is to be used to dine upon, or to write upon, or to hold a vase of flowers, etc. This comes from the concept of Telos, of an end purpose. The case of the table is a extrinsic telos, it is a final cause imposed by an outside force (in this case humans). It is argued by Aristotle that natural things have an intrinsic telos, a final cause that is present in them all along. The intrinsic telos or Final Cause of an acorn is to grow into an oak. This necessitates either a Prime Mover and/or some kind of Plantonic Forms to assign this. The other causes are determined by the Final Cause, for it is, after a manner, the destiny of the object in question.

So lets make this an fit into a RPG.

Many players of RPGs and, I would think, most folks in the OSR community are rather familiar with various magical and supernatural beliefs and systems. One that is very common is the concept of a True Name. In Wizards of Earth Sea, the True Name of an object is entirely how magic is worked. The inhabitants of the Archipelago only give their nicknames, for they know their True Names can be used against them. In various systems of Demonology, you may only command a spirit by knowing its True Name. King Solomon held his power over spirits by having knowledge of the 72 Names of God.

I posit that to absolutely know a True Name is to know its Four Causes. This makes the understanding of inanimate objects significantly easier. This is why any wizard can enchant any simple blade. Material: Steel. Formal: Sharp Weapon. Efficient: Blacksmith. Final: To do harm.

However enchanting something living is more complex and more temporary. You may charm a man, or cause him to grow into a giant, or change him into a toad. However in most cases this effect is temporary. This is because you only hold a portion of that True Name, only a few of the causes. Jim the Fighter's Material Cause is Flesh/Bone (or Clay if you will), his Formal Cause is Man, his Efficient Cause is his Mother and Father, and his Final Cause, who can say? This is easier with beings such as Devils, Angels, and Elementals, for they were crafted for known and documented causes. But for mortals, possessing in them true Free Will, their Final Cause is intricate, changing, and perhaps unknowable except by the greatest of minds.

The Four fits nicely with GLOG's casting mechanic of a max of 4 Magic Dice. Many spells scale in power as you invest more dice, potentially representing a deeper understanding of the fundamental Causes behind the spells and behind the caster's target. Mishaps or Dooms could be caused by a corrupted or insufficient understanding of the Causes, thereby resulting in a casting. Including my spells as "What Ifs" idea, you are trying to force a change or an effect against this universe's Causes, Causes that have been assigned and Causes that show why a thing currently is as it is. By subtly changing them, you work magic, but the universe is by far older and more concrete than any single mage and thus the true Four Causes almost always reassert themselves.

Notice in the description of the Final Cause, I reference the need for Platonic Forms or for a Prime Mover. Well luckily in fantasy that is far easier to deal with. You may have your gods, or in Pathfinder you have Abadar's First Vault, an actual repository of Platonic Forms. In my case, I have the Kings who are at once the Prime Movers of the causes and the incarnations of the Platonic Form of objects all in one.

Perhaps I'll make a Wizard school that deals with this on a meta level. I'm sure you lot can think of a variety of True Name or Words of Power type connection here. But for now I'll just leave you with this image of Aristotle getting ridden by Phyllis. 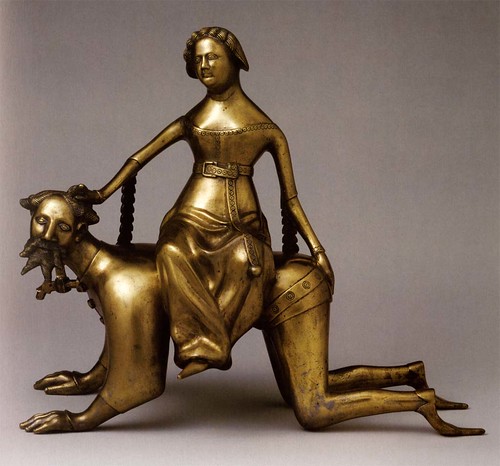