Dear Goody Mooncup: I recently helped my brother clean out his friend’s basement. While down there, we found a small vial of orange liquid. His friend dared me to drink it, and at first I refused. After they made some jokes about my manhood, I gave in and drank it down. I immediately began dancing, and I haven’t stopped since. What should I do? Is there any way to rid myself of this curse?

Dear Oogie, Orange plus dancing? Oh my dear child, what a fretful situation you've found yourself in! I believe you have ingested and entire vial of Liquid Funk, which should really only be used in a spritzer! Please know that the safest thing to do now is accept your fate, enter some dance competitions, and enjoy your life as best you can. However, if you do wish to stop dancing before your venerable years you must ingest the opposite of Funk, you must ingest Blues. But I must forewarn you, an inappropriate balance will leave you cursed with woes, blind, gravely, and preternaturally good at the guitar.

The first component of liquid Funk is Saffron, giving it both its orange color and causing blood to flow to all the right areas, if you catch my meaning. To combat it, you must start with a base of Lavender, a deep blue and restful herb. Indigo works in a pinch but Lavender tastes better. To this you will need to add two ounces of pluf mud from the bayou, a quart of your own sweat obtained through honest but underpaid labor, six letters of unrequited love, the tears of an impoverished but musically gifted child, a notarized infernal contract, and a barrel of the highest quality brandy you can obtain. This will need to be mixed, boiled and distilled repeatedly using a copper alembic until a deep soulful blue liquid is obtained. Normally I would suggest that this be used with a spritzer as in small quantities it is enough for a reasonable harmonica solo, but in your case the entire vial will be called for. I do hope your dancing days are soon over, best of luck dear!

Skull Wizard:
Dear Goody Mooncup: My skulls keep vanishing. I suspect the work of the fae. Could help me out? I am unprepared for everything other than skulls.

Dear Skull, Oh my! Yes, we have all experienced the glamours of the fae and their little acts of mischief, especially those of us versed in the magical arts. What makes a better target for tomfoolery than one's spell components? Only last week I found that my bats were dropping nuggets of gold rather than guano and I had to beat the local elf-lord around the ears with my broom before I had a reliable source of nitrates again! I don't suggest going out and doing this yourself of course, Wizards never really figured out the proper wrist action for brooms. So you have two possible courses of action here, either stop the fae from taking your skulls or finding a skull-alternative! For stopping the fey, I would suggest mixing up a Hot-foot Powder of equal parts cayenne pepper, brick dust, cold iron shavings, and devil's shoestring. Take this powder and ring it around your perimeter and it should stop the silly little things from getting in. Of course, this would also dampen the latent magic within the confines of the hot-foot powder circle and may cause your own magical experiments to short out.
For a skull alternative, I suggest making Sugar Skulls. You will want to purchase a large quantity of sugar and and eggs and wait for a good hot and dry day. Mix 6 cups of sugar to two egg whites and use the resulting paste to create skulls, I personally have a mold to make this process easy. you must then press into the skulls a full set of human teeth, making sure one tooth has a cold iron filling. Then set it out to dry and harden. You see, it is the Teeth that are grounders for magic and not the skull itself, but the skull shape is the best way to route and channel that magic to any sort of purpose. The sugar will at first attract the Fae, but after one lick with that cold iron tooth, they will quickly gain a distaste for your skulls. Make sure to remove the iron filling before you use the skull for your own purposes of course to avoid catastrophic sugar feedback. My eighteenth husband, Mammon bless him, learned the hard way what happens when a fireball meets a room full of airborne powdered sugar. In any case, if you have left over sugar afterwards, make some Royal Icing and decorate your skulls for easy identification!

Richard Johnson:
Dear Goody Mooncup: What on earth is this rash I've gotten? Is it one of yours?

Dear Richard, I swear upon the hairs of my chin and the warts on my nose that you would know my rashes without question. After all, they are trademarked! If you have caught a rash in the wild, especially of the sort you've implied, I highly suggest keeping in a dry place, apply plenty of witch hazel, and think pure thoughts. And please do not confused witch hazel with Witch Hazel, who would be most displeased if you exposed your...erm...rash to her. 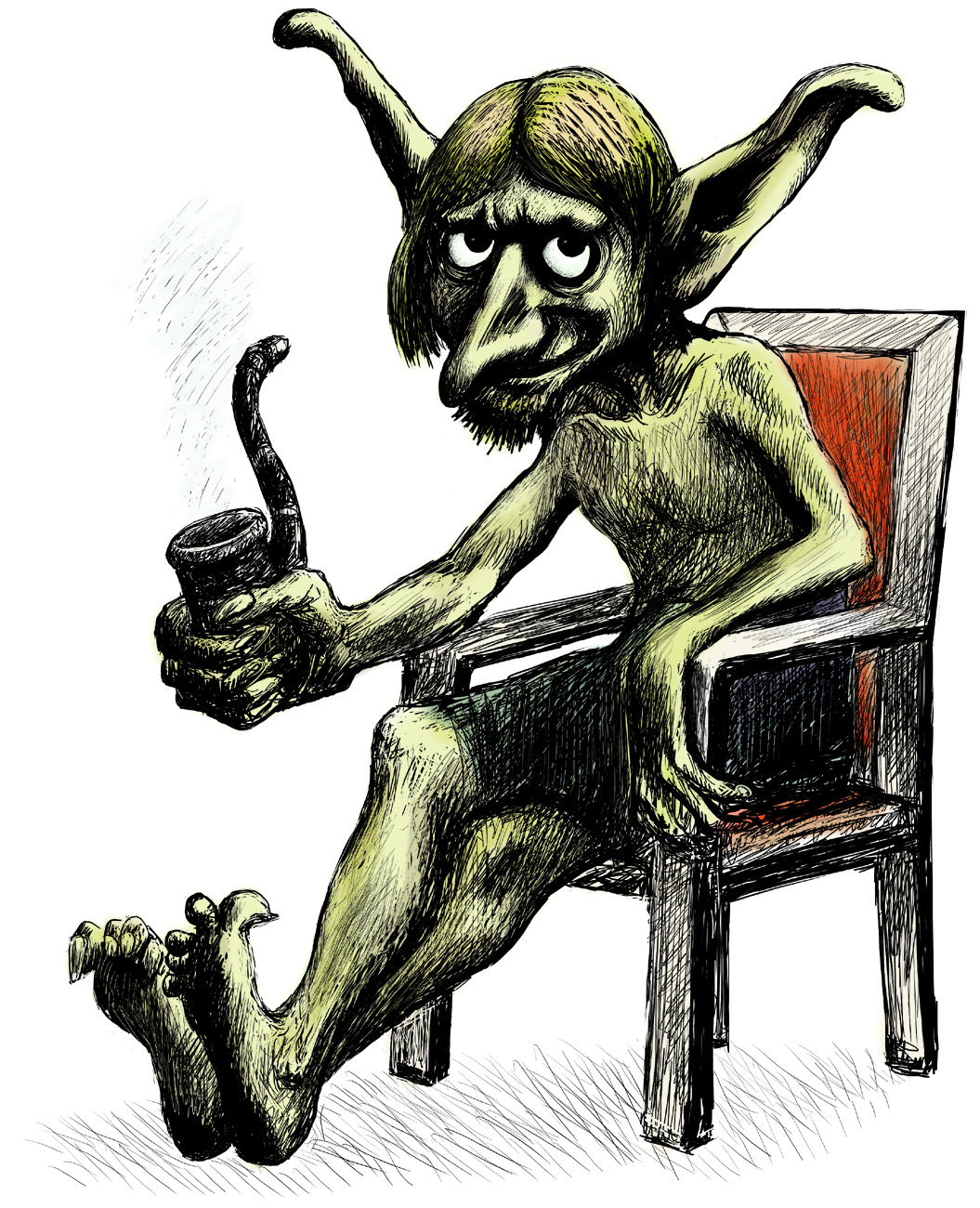 Furtive Goblin:
Dear Goody Mooncup: Do you have any quick tips on how to effectively broker peace between protesting house kobolds and irate Dutchmen? Research for my next Goblin Watch hinges on it!

Dear Furtive, Well my dear Goblin, I do applaud you for continuing your research in your various cousins! Yes, the relationship between a domestic kobold and the so called "home owner" can be quite the source of drama. After all, every house has a kobold and they ask for little in return, merely some leftovers and some polite respect. But even this is too much for some folks, especially in this heathen age of "Roombas" and electronic dish washers. They leave their house a mess and expect everything to be done for them automatically. Part of the respect one gives to a kobold is at least putting in some effort in your own upkeep. I'd be double damned if you found a kobold nowadays that felt confident enough in their own homes to give prophecy or any real luck out like Heinzelmann or Hödekin of old did. And you say the issue at hand here is with irate Dutchmen? Surely the issue started on their side as a kobold will never be more malicious than a small prank or two without provocation! These Dutchmen must has slighted their co-inhabitants in some way to have provoked this protest. And knowing Kobolds, they've undoubtedly not given any mercy to their tormentors for this trespass.
So, my dear! The most important thing to do here is to first find out what the initial provocation was and address that. Of course by this point there is surely a whole list of complains on either side, but these cannot be addressed until the initial issue has been. One must begin to begin as it were. Of course, after enough insult the Kobolds will eventually throw their hands up and leave, but not before laying down their most heinous curses. As Kobolds dislike being seen, but it is obvious there needs to be some conversation here, I suggest this. Take the largest room in this home and vacate it of all furniture. Take two long dining tables and set them end to end in the the center of the room. Between these tables pull a long white curtain, enough that shadows can be seen between the two parties but not so sheer that details can be made out. Then a sumptuous feast must be laid on one end of the table with the best napkins and china and silverware the house has to offer. To this side off the Kobolds a place and allow them to dine to their heart's content. Once this as been completed, move the leftovers (dishes and all) to the Dutchmen's side and allow them to experience what Kobolds generally live upon. Only after both parties have dined separately will you invite both into the space for talks. I suggest cookies and coffee be served to both sides at this point as the last thing we need are lethargic, full kobolds and Dutchmen with low blood sugar.

If these talks are ultimately fruitless, one must hope that the kobolds are tied to the physical house rather than the family, as the only route to peace will be for the Dutchmen to move out. Otherwise I imagine that there will be generations of hostilities still to come!

And that's it this week for Dear Goody Mooncup! Remember my little morsels that I will be hosting my two hundred and fifty third annual flea market very soon and I will be there signing my new book, "Feeling Impish, a Diabolist's Guide to Love."
Posted by TheLawfulNeutral