When Stuff comes in contact with a person's thoughts, Reification occurs, that is the making of something Real. It manifests human thoughts and emotions from the Noosphere and into the physical plane, often with horrific results. As mentioned in the previous post, sometimes Stuff mingles with and fuses with a person. More often than not, this results in a hideous agonized thing that dies shortly thereafter due to incompatible biology. However on rare occasions the end result survives and, on rarer occasions, can thrive. These folk are fusions of man and fantasy, wishes and stray thoughts and idle day dreaming. Some might even appear as creatures from fantasy and scifi, they might look like elves or little grey men or centaurs or Wookies. The more outrageous the transformation, the less likely the end result can actually survive long, after all it is the result of imagined biology. This is why there are very few children among the Found Thousand, for while their imaginations are vast, their knowledge of anatomy tends to be on the weak side. This table is assuming the resulting Unreal Person actually survives their creation. 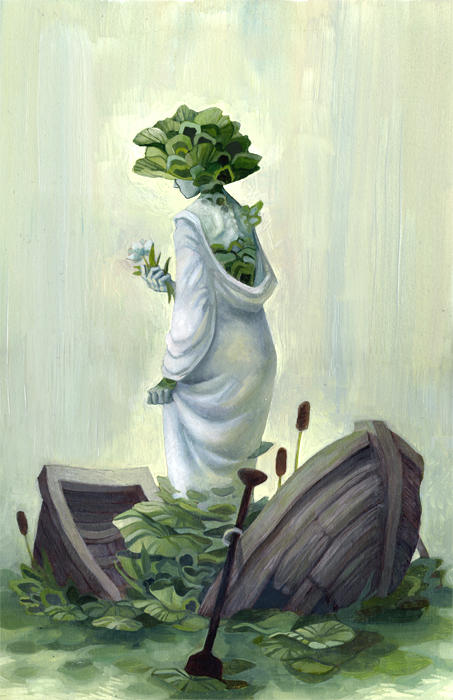 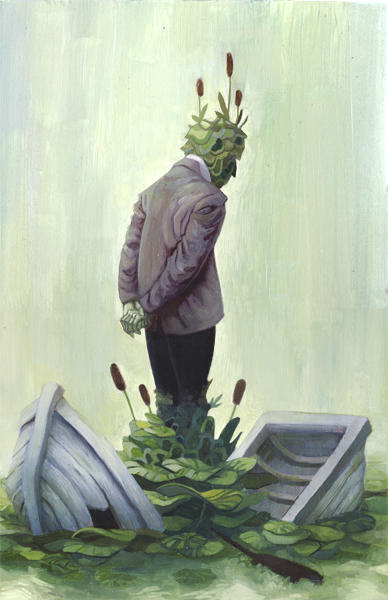 by Biffno
This Unreal Person has a:

Head which
1. is that of an animal or plant, is nominally incapable of speech
2. has proportions like a Cortical homunculus
3. is featureless save a wide mouth
4. is on backwards
5. has long elf-like ears
6. has huge fangs, can't close mouth
7. has a cartoonishly large nose
8. is permanently twisted into a single exaggerated expression
9. has 1d6(exploding) horns
10. has 1d6(exploding) eyes
11. has a 10' long chameleon-like tongue
12. is twice the normal size with dinner plate-sized eyes
13. has its features scrambled
14. can unhinge its jaw wide enough to swallow a small dog whole
15. is a literal butt head
16. is not there, face is on torso Blemmyes-style
17. has ineffectual bat wings instead of ears
18. Has cat-like eyes
19. there are two of
20. is remarkably human.

And arms which
1. end in hands as large as the rest of their body combined
2. end in gnarled claws
3. are not there
4. have all their joins reversed
5. are independently active snakes
6. are wings, 50/50 chance of being functional in any way
7. are squid tentacles
8. have multiplied into 2d4 arms
9. are made of solid, immobile bone
10. have fractal fingers
11. are blooming cherry tree branches
12. are twice as long as normal
13. end at the elbow in stubby hands
14. are praying mantis arms
15. are grotesquely over-muscled
16. are withered and useless
17. have 1d6 (exploding) extra elbows and length to accommodate
18. are manikin-like
19. are legs
20 are remarkably human.

And legs which
1. are an entire horse
2. are goat-like
3. are not there
4. have webbed toes
5. is a fish tail
6. are tank treads with dozens of feet
7.  have organic suction cups instead of feet
8. are twice as long as normal
9. are elephantine
10. end at the knee with stubby feet
11. taloned and bird-like
12. are a mass of writhing tendrils
13. are an immobile tree stump
14. are springs
15. are bone-blades from the knee down (really hard to walk)
16. are atrophied and useless
17. have all of its joints reversed
18. BUER LEGS
19. are arms
20. are remarkably human.

And a torso that
1. can split into a huge maw
2. has the consistency of warm wax
3. has a hideous parasitic twin growing from it
4. has a functioning udder
5. is a bulbous, snail-like shell
6. has hideously over developed sex organs
7. is monstrously corpulent
8. is almost skeletally gaunt
9. writhes like something is attempting to escape from within
10. has sharp spines jutting from its back
11. has webbed skin ala a flying squirrel
12. is half the size and twice the density of normal
13.is twice the size and half the density of normal
14. has a large hole through it, like a human doughnut
15. is riddled with pulsing tumors
16. has a tail (1d4 monkey-like, cat-like, dog-like, floppy useless atavistic like)
17. is hermaphroditic
18. grows from the hips as 1d4+1 identical upper bodies of independent personalities
19. can inflate and deflate like an accordion
20. is remarkably human.

and finally
1. has hollow, bird-like bones
2. is completely covered in dense fur
3. has thin, parchment-like skin
4. secretes slime like a slug
5. has skin colored 1d10 Infrared (see through), Red, Orange, Yellow, Green, Blue, Indigo, Violet, Vantablack, Rainbow
6. has mirrored DNA and is not long for this world
7. has functional gills but no lungs
8. is covered in hard scales
9. Has no skin at all
10. has spare, redundant organs
11. is gelatinous with organs all floating in a non-Newtonian goop
12. is child-like
13. bleeds 1d6 (Acid, Spiders, Sap, Fresh Water, Stuff, Miniature Clones)
14. can't feel pain
15. is in constant wracking pain
16. is slowly rotting
17. is biologically immortal
18. is completely unaware that they are not a normal person
19. can breed true.
20. is a p-zombie.

On top of these, I suggest rolling on your favorite Failed Career table to find out what this Unreal Person was before they became what they are now. I also suggest that you extrapolate on what these Unreal People's "abilities" are based upon this table, but keep in mind that they are ultimately traumatized humans in bodies that are not wholly functional. A centaur generated from this table is not perfectly fused and still thinks like a two legged person, they might be able to gallop but it is not going to be pleasant or graceful. Furthermore you can use this table on animals instead to generate terrible Unreal Animals. Nothing like a shark with tank-tred legs and wings speeding at you from a sea of liquid Stuff.